From Wikipedia, the free encyclopedia
Jump to navigation Jump to search
American actress (1934–2022)

Estelle Louise Fletcher (July 22, 1934 – September 23, 2022) was an American actress who portrayed the antagonist Nurse Ratched in One Flew Over the Cuckoo's Nest (1975), which earned her an Academy Award for Best Actress, a BAFTA Award, and a Golden Globe Award. She also had a recurring role as the Bajoran religious leader Kai Winn Adami in the television series Star Trek: Deep Space Nine (1993–99), as well as the role of Sebastian's aunt Helen Rosemond in the movie Cruel Intentions (1999). She was nominated for two Emmy Awards for her roles in the television series Picket Fences (1996) and Joan of Arcadia (2004). Her final role was as Rosie in the Netflix series Girlboss (2017).

Estelle Louise Fletcher was born on July 22, 1934, in Birmingham, Alabama,[1] the second of four children of Estelle (née Caldwell)[2] and the Reverend Robert Capers Fletcher, an Episcopalian missionary from Arab, Alabama. Both her parents were deaf and worked with the deaf and hard-of-hearing.[3][4]

Fletcher's father founded more than 40 churches for the deaf in Alabama.[5] Fletcher and her siblings, Roberta, John,[6] and Georgianna,[5] were all born without any hearing loss,[7] so she was taught to speak by a hearing aunt.[3] She received a bachelor's degree in drama from the University of North Carolina at Chapel Hill in 1957.[8]

Fletcher began appearing in several television series including Lawman (1958) and Maverick (1959). (The Maverick episode "The Saga of Waco Williams" with James Garner was the series's highest-rated episode.)[9] Also in 1959, she appeared in an episode of the original Untouchables TV series starring Robert Stack, "Ma Barker and Her Boys", as Elouise.[10] Fletcher recalled having greater success being cast in Westerns due to her height:

I was 5 feet 10 inches [1.78 m] tall, and no television producer thought a tall woman could be sexually attractive to anybody. I was able to get jobs on westerns because the actors were even taller than I was.

In 1960, Fletcher made two guest appearances on Perry Mason, as defendant Gladys Doyle in "The Case of the Mythical Monkeys", and as Susan Connolly in "The Case of the Larcenous Lady". In the summer of 1960, she was cast as Roberta McConnell in the episode "The Bounty Hunter" of Tate, starring David McLean.[11]

[When conceiving of a way to play Nurse Ratched] [s]he thought back to her childhood in Alabama, and the "paternalistic way that people treat other people there." Moving to California had opened her eyes to how warped things had been back home. "White people actually felt that the life they were creating was good for black people," she says—a dynamic she recognized in Nurse Ratched and her charges. "They're in this ward, she's looking out for them, and they have to act like they're happy to get this medication or listen to this music. And make her feel good about the way she is.

In 1974, Fletcher returned to film in the crime drama Thieves Like Us, co-produced by her husband Jerry Bick and Robert Altman, who also directed. When the two had a falling out on Altman's next project (Nashville (1975)), Altman decided to cast Lily Tomlin for the role of Linnea Reese, initially created for and by Fletcher. Meanwhile, director Miloš Forman saw Fletcher in Thieves and cast her as McMurphy's nemesis Nurse Ratched in One Flew Over the Cuckoo's Nest (1975).[3] She based her performance of the character on the paternalistic way she saw white people treat black people in her native Alabama.[12] Fletcher gained international recognition and fame for the role, winning the Academy Award for Best Actress, as well as a BAFTA Award and Golden Globe. She was only the third actress ever to win an Academy Award, BAFTA Award, and Golden Globe Award for a single performance, after Audrey Hepburn and Liza Minnelli. When Fletcher accepted her Oscar, she used sign language to thank her parents.[13][2] 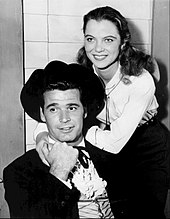 James Garner and Fletcher in Maverick (1959)

Fletcher co-starred in TV movies such as The Karen Carpenter Story (1989) (as Karen and Richard Carpenter's mother, Agnes), Nightmare on the 13th Floor (1990), The Haunting of Seacliff Inn (1994), and The Stepford Husbands (1996). From 1993 to 1999, she held a recurring role in Star Trek: Deep Space Nine as the scheming Bajoran religious leader Kai Winn Adami.[15] She also earned Emmy Award nominations for her guest roles on Picket Fences (1996), and later on Joan of Arcadia (2004).[16] In 2009, Fletcher appeared in Heroes as the physician mother of character Emma Coolidge. In 2011 and 2012, she appeared on four episodes of Shameless as Grammy Gallagher, Frank Gallagher's foul-mouthed and hard-living mother, who is serving a prison sentence for manslaughter related to a meth lab explosion. She portrayed the recurring role of Rosie on the series Girlboss (2017).[17] 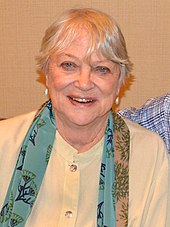 Fletcher married literary agent and producer Jerry Bick in 1960, divorcing in 1978.[13] The couple had two sons, John Dashiell Bick and Andrew Wilson Bick.[18] Fletcher took an 11-year break from acting to raise them.[13]

Fletcher received an honorary degree from Gallaudet University in 1982.[19]